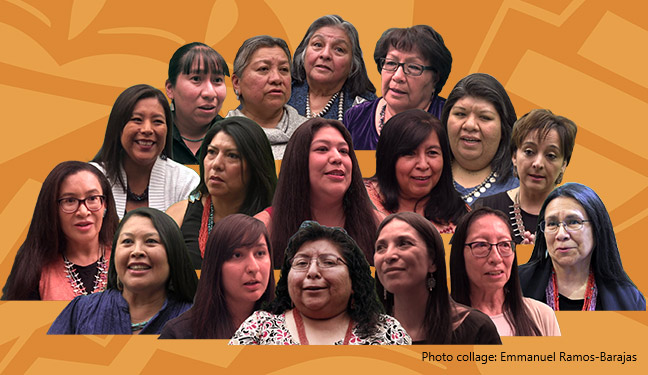 This blog aspires to connect readers to Indigenous* resources, information, and fun stuff at the Indian Pueblo Cultural Center (IPCC) and online. Each month, new content will be shared on various themes.

The third month of the Gregorian year, March, welcomes the Spring Equinox on Sunday, the 20th. Equinox comes from Latin words aequus meaning “equal” or “even” and nox, meaning “night.” On this day, the sun passes over the equator making day and night an approximate equal length of time.

In the Northern Hemisphere, spring arrives and with it longer daylight hours and warmer temperatures. Cultures celebrate the Spring Equinox as a rebirth for vegetation begins to grow and animals come out of hibernation giving the Earth a sense of renewal. Given that Earth is called Mother―because she nurtures and cares for us, which we should do in return―it is appropriate, then, in the month of March, to celebrate the accomplishments of women to history and for the nurturing and caring they do for their communities.

To address the lack of women’s history in K-12 curriculum, the Education Task Force of the Sonoma County (California) Commission on the Status of Women started a “Women’s History Week” in 1978. The week of March 8 (International Women’s Day) was chosen for the observance.

Often overlooked in the American narrative, thousands of American Indian and Alaska Native women have contributed to history―and continue to do so daily―at the national, city, local, and community level. For some, it is based on the collective and Indigenous ancestral knowledge they hold in their community. For others, their work is an extension of their obligation as caretaker.

In honor of National Women’s History Month, the ICC library blog highlights the work of several Pueblo women interviewed as part of the “Journeys & Pathways: Contemporary Pueblo Women in Leadership, Service, and the Arts” Oral History Project. Each of these women work for the betterment of their Pueblo communities and Indigenous people as a whole. Mentorship is one theme and encourage others to reach their potential.

Tara Gatewood (Isleta Pueblo/Diné), former host of Native America Calling, is now the Program Director at the International Women’s Media Foundation and heading up an initiative to bring attention to violence against Indigenous women across the U.S. and to the issue of Missing and Murdered Indigenous Women and Girls (MMIWG).

Jenni Monet (Laguna Pueblo), award-winning investigative journalist on Indigenous Affairs and Indigenous rights and injustice in the U.S. and around the world. Read her articles here. Sign up for her newsletter, Indigenously: Decolonizing Your Newsfeed.

The Indigenous Wisdom Curriculum provides a counternarrative―a Pueblo perspective with Pueblo-centered cultural knowledge―of the complex political, social, cultural, and economic history. The goal of the curriculum is for Indigenous students and their teachers to become intellectually aware of the critical roles Pueblo people have exercised when faced with the challenges of federal and state policies.

“The effect of a counter-narrative is to empower and give agency to those communities. By choosing their own words and telling their own stories, members of marginalized communities provide alternative points of view, helping to create complex narratives truly presenting their realities.” ~ Raúl Alberto Mora

Push Back! Why Counter Narratives are Critical in Challenging Times

March 8 – Female Genius: Eliza Harriot and George Washington at the Dawn of the Constitution

The National Museum of the American Indian offers a range of resources about and from Native American Women and Native Knowledge 360° Recorded Webinars including sessions from the Teacher Workshop Series – Indigenous Women: Artists and Activists.

Jonna C. Paden, Librarian and Archivist, is a tribally enrolled member of Acoma Pueblo. As part of the Circle of Learning cohort, she holds a Masters in Library and Information Science from San José State University where she focused on the career pathway of Archives and Records Management. She is also the archivist for the New Mexico Library Association (NMLA) and current Chair (2020-2022) for the New Mexico Library Association (NMLA) Native American Libraries – Special Interest Group (NALSIG).