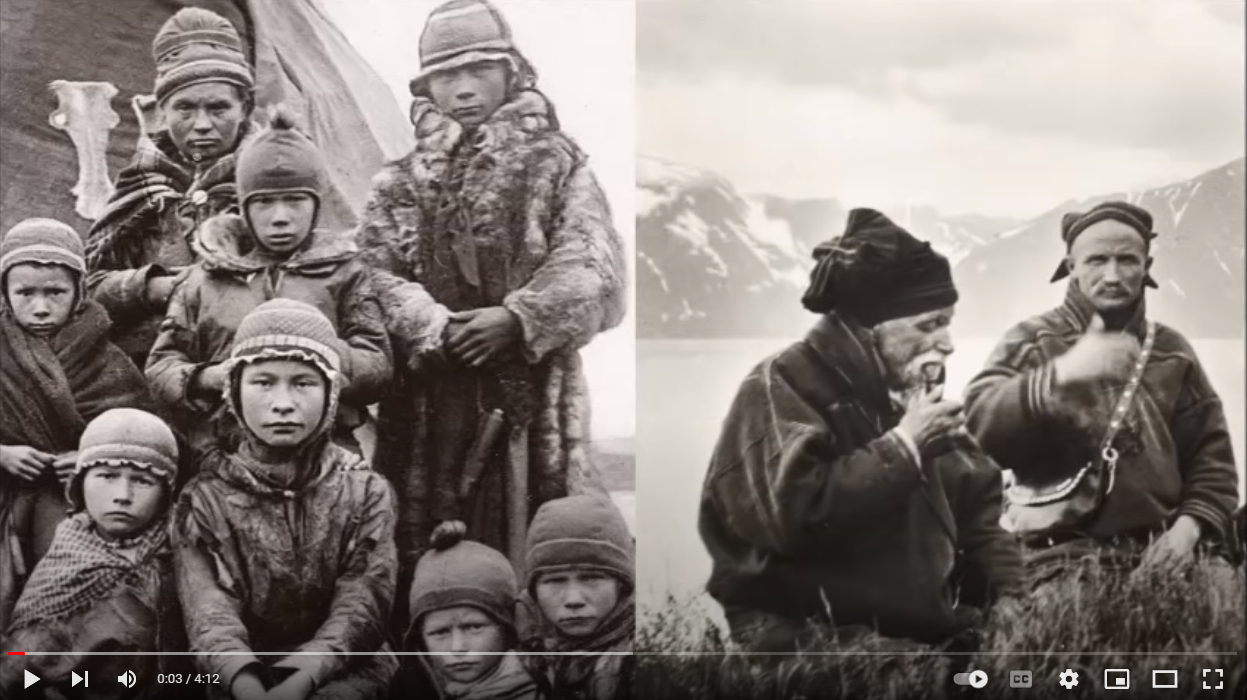 This blog aspires to connect readers to Indigenous* resources, information, and fun stuff at the Indian Pueblo Cultural Center (IPCC) and online. Each month, new content will be shared on various themes.

Sámi National Day is celebrated in memory of the first Sámi national meeting that took place in Trondheim on February 6, 1917, the first gathering of Sámi from across Sápmi – traditional Sámi territory – to collaborate on common issues across imposed national borders. Sámi National Day was adopted at the 1992 Sámi conference and was celebrated for the first time the following year.

The Sámi Parliament Act (1992) states that a Sámi is someone who considers themselves Sámi and that the Sámi language must be or have been the language in your home, your parent’s, or grandparent’s home. Also, if your parent is included on the electoral register. Before the Sámi Parliament Act, only those who had reindeer and did reindeer herding were considered Sámi, which excluded large numbers of people. (Samer) Language is now the primary identifier.

There are nine living languages, which are divided into two groups based on geographic, historic and linguistic relatedness. Eastern Sámi includes Inari, Kildin, Skolt, and Ter. Western Sámi is Lule, North, Pite, and South. Northern Sámi is the most dominant with about 25,000 speakers. The Sea Sámi are thought to have had an independent language. Over the centuries, the Sea Sámi adopted other dialects. Only a few living elders that can speak Sea Sámi. Akkala Sámi was spoken in Russia, but perished with the last speaker in 2003.

There is no official census of Sámi people. The estimated number is between 50,000 and 100,000. The Sámi homelands, Sápmi, stretch across Norway, Sweden, Finland, and northwestern Russia. A large part of northwestern Sweden is the traditional territory of the Sámi. Reindeer herders, small farmers, hunters, fishermen, and gatherers traditionally use these lands.

Traditional dress is called gákti (Northern Sámi). Gákti identifies which Sápmi area a person is from. The cut of clothing differs between men and women. Women’s gákti are longer, as is gákti from the southern Sápmi area. Some gákti indicate one’s age and status – married or single.

Clothes and shoes were made from reindeer and other furred animals, and included the use of skin and tendons. Broadcloth and wool were bought from tradesmen. Today, silk, velvet, and synthetic fabrics have been added. Traditional accessories include belts, shoes, shoelaces, storm collars, jewelry, gloves, trousers, and caps, and for women, shawls.

Risku is a brooch typically worn on special occasions. In a traditional Sámi wedding, a bride might wear several. Risku are often passed down in the family or given as christening or confirmation gifts.

The current circular design of risku evolved from oval brooches crafted from reindeer horn, which was often carved with symbols that represented the sun. Though unknown when silver was first traded for reindeer meat and hides, it became a symbol of prosperity and a form of currency.

Dressing with Purpose – Belonging and Resistance in Scandinavia at the Museum of International Folk Art in Santa Fe features three dress traditions: Swedish folkdrākt, Norwegian bunad, and Sámi gákti. In this exhibition, visitors are introduced to individuals who adapt and revitalize dress traditions to articulate who they are, proclaim personal values and group allegiances, strive for sartorial excellence, reflect critically on the past, and ultimately, reshape the societies they live in.

Joik (Norwegian) is a traditional Sámi musical expression. In joik, melodies and rhythm are identity markers and comprised of layers of meaning. Words, gestures, and facial expression can accompany a joik and is more than a representation about someone, an animal, or nature. The joik is (an expression of) that (feeling of) person, animal, or place. After death, to joik someone (in remembrance) is to have them close by. Ancestor joiks are remembered for generations.

As part of Sámi life, joiks are company when alone or when reindeer herding. Joiks are given to people as gifts. Joiks depict characteristics and great deeds, to give another self-confidence, or for courtship. A person may have several different joiks. For example, one given to a child (dovdna) can adapt to fit the child when they are older.

Joiks are a way of passing on knowledge and stories. During Christianization, from the 1700s onward, joiks were banned. In recent years, it has experienced revitalization and blending with instruments and new genres like pop, electronica, or metal.

Duodje, loosely, is the handicraft of the Sámi. A part of cultural traditions and knowledge, duodje is entwined with identity, cultural preservation, and with survival. Duddjon, the crafting process of the hands, provided utilitarian items made from materials created from natural resources. Regional connections can be seen in decorations, patterns, and material choices. Contact with other peoples has left their mark within duodje.

Over time, like many other Indigenous cultural craftsmanship, these materials have developed into collectable arts. Each crafted piece is infused with cultural heritage, from creation to materials and design.

On September 9, 2021, the Sámi community and the Sámi Museum Siida in Inari – the center of the Sámi – celebrated the homecoming of 2,200 Sámi cultural heritage items repatriated from the Finnish National Museum. The items were collected from 1830 to 1998. The exhibit, Mäccmõš, maccâm, máhccan – The Homecoming, highlights 140 archived materials, photos, and work by contemporary Sámi artists. Intermixed with the heritage items are contemporary items from Sámi crafters and artists. The exhibit text includes three Sámi languages spoken in Finland and stories by the Sámi. Sámi materials – photographs and yoiks – add to the story.

Traditional reindeer herding has been practiced since the 17th century. It was not a profession, but a way of life. Reindeer were used for clothing, food, trade (as a form of money), and labor. Time is measured by the passing of the seasons. Each season is subject to the reindeer and the climate. The lavvu, a portable home, is moved and set up migration trails. (Sanna) The continuation of herding is essential to the survival of Sámi identity.

In Norway, colonization from the south pushed Sámi north until could not move any further. Farmers settled on Sápmi land, which disturbed pasture areas and migration routes, leading to fewer reindeer grazing areas. Because land ownership was foreign to the Sámi, they did not have land rights, whereas the Norwegian farmers did. (Sanna)

Mining and industry have also greatly impacted reindeer herding. Human settlement, inroads and railroad cut through migration paths and grazing areas; reindeer are in danger of being struck by trains NS cars. The construction of the Alta dam at the Kautokeino River has also impacted reindeer herders.

Government involvement has also affected herding lifeways. The government offered incentives to decrease the number of older reindeer herders and limited the number of new herders. The governor offered subsides for herding and cash reward for slaughter, which shifted the economics of reindeer. Herding shifted from subsistence to a market economy.

Traditionally, the Sámi used every part of the reindeer – skin, organs, meat, milk, and blood. Government interference turned meat production into profit. Duodje made from reindeer could be traded for items. Now, they were paid in cash. This led to competition between Sámi for the best pasture areas. Poaching increased. Reindeer earmarks were introduced as indicators of herd ownership.

Sámi joatkkaskuvla ja boazodoalloskuvla is a Sámi high school and reindeer herding school in Kautokeino, in northern Norway. The school’s vision is that students will learn knowledge rooted in Sámi society and culture. The school curricula is developed in Sámi language, duodji, natural use, reindeer husbandry, restaurant and food, construction and specialized subjects. Part of the school’s vision is to strengthen and develop the Sámi identity, language, and culture in Sámi youth.

Aida. (n.d.). What is duodji? https://arkisto.fi/aida/en/students-of-duodji/what-is-duodji

Beneath Northern Lights. (2019, March 26). Yoik – one of the oldest vocal traditions in Europe. https://www.beneathnorthernlights.com/joik-the-oldest-vocal-tradition-in-europe/

Jonna C. Paden, Librarian and Archivist, is a tribally enrolled member of Acoma Pueblo. As part of the Circle of Learning cohort, she holds a Masters in Library and Information Science from San José State University where she focused on the career pathway of Archives and Records Management. She is also the archivist for the New Mexico Library Association (NMLA) and current Chair (2020-2022) for the New Mexico Library Association (NMLA) Native American Libraries – Special Interest Group (NALSIG).